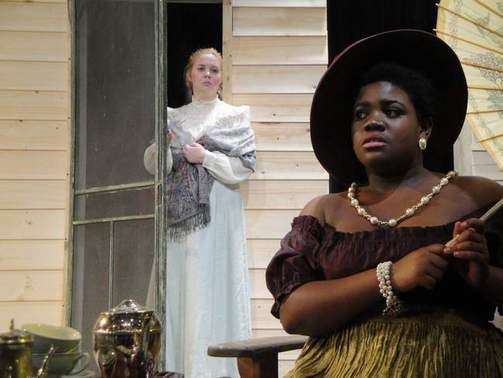 A One-Act Comedy
by
August Strindberg

in a new translation
by
Malin Tybåhl  and Laurence Carr

Copyright 2006 by the translators

Sarah Hutchinson as Kerstin and Jazman Jackson as Adele

Axel, 26, a friend of Newt and Kerstin, a poet/academic

A lakeside summer house on the coast of Sweden. A chilly early fall morning, 1912
This translation also works to set the play in an art colony near Woodstock, NY, 1912.

The premiere of Playing With Fire, a one act comedy by August Strindberg, in a new translation by Malin Tybahl and Laurence Carr and directed by David Cohen was produced by the SUNY Orange Apprentice Players, Orange Hall Theatre, SUNY Orange, during the weekends of Nov. 7-9 and 14-16, 2014.